The relationship between paparazzi and celebrities has always been a tumultuous one by its nature. The narrative power that the press holds in relation to the public has decreased however once with the emergence of social media. This has given celebrities greater control over their image and led to a decrease in the once-thriving paparazzi profession.[1] However, millions of followers online must be entertained with content from their favourite star and updates on their personal and professional life. Therefore, images of celebrities captured by paparazzi are frequently shared on social media accounts by celebrities without obtaining permission from the photographers, who have long been recognized as the rightful authors of a photograph under federal copyright law in the US.[2]

An impressive number of copyright law infringement cases have been filed against brands, celebrities and supermodels for posting on their social media pages images taken by the paparazzi without license or permission.[3] In general, these paparazzi-initiated lawsuits have been short-lived: just a few cases have gone to trial, with the majority of cases terminating in a settlement or dismissal.[4]

In January 2019, Xclusive-Lee filed a copyright infringement complaint against Gigi Hadid, alleging that she had “copied and posted” its copyrighted photo to her Instagram profile “without license or authorization.”  In an unexpected turn of events, the legal team of the supermodel has opted to challenge these allegations by claiming that it was ‘fair use’ as she contributed to the photography.  The interesting argument of ‘fair use’ used by John C. Quinn, the leading attorney, was argued based on the four different tests of ‘fair use’: 1)purpose and character of the use, 2) the nature of the copyrighted work, 3) the amount and substantiality of the portion taken, and 4) the effect of the use upon the potential market.[5]

The defendant argued that firstly, by sharing the photo on her Instagram profile, Gigi had no intention of monetizing it or benefitting from it. Regarding the second test, she contributed to the project by pausing to smile at the camera. As a result, the image emphasizes Gigi’s artistic approach rather than the photographer’s. Third, before publishing the photo on her feed, Gigi edited it, emphasizing her face, smile, position, and outfit rather than the photographer’s original arrangement. As a result, she has significantly changed the photographer’s composition, causing her fans to focus on her rather than the photograph’s arrangement.[6] Regarding the last test, the defendant argued that the paparazzi agency did not claim any loss of ‘significant revenue’ and thus the last and most essential criteria of fair use have been met. Gigi utilized the image for a purely personal reason rather than to make a profit from it.

Quinn, Hadid’s attorney, sent The Hollywood Reporter a statement following the decision: “We are pleased that the Court granted our motion to dismiss this meritless case. The Court’s decision recognized this case for what it was — an effort to extract a settlement from Ms. Hadid with little regard for the basic requirements of copyright law.”[7] 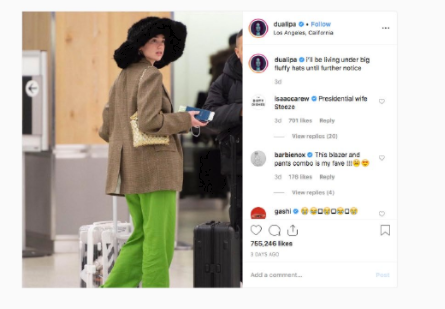 In a more recent case, the pop singer and songwriter, Dua Lipa, was sued earlier this year for allegedly posting a picture of herself taken by the paparazzi on Instagram. According to the damages provision of the Copyright Act, posting a copyrighted image without obtaining prior permission or license, may lead to a liability in damages up to $150 000 for a willful infringement[8], aside from the attorneys’ fees and other court costs. Integral emphasized Dua Lipa’s intentional infringement, in this case, arguing that she “takes an active and pervasive part in the information uploaded on [her] account,” positioning itself to seek statutory damages. According to court filings, her Instagram account is “monetized in that it contains content designed to accumulate followers who are directed to, via a link and/or advertisement, consume and purchase [her] content”.[9]

Celebrities and paparazzi have had a tense relationship for decades, but the development of social media, as a pervasive aspect of how celebrities connect with their followers, has put everyone involved in new legal territory. Despite the fact that this situation has occurred several times, the cases have usually been resolved out of court or decided on a pleading defect. All sides may and will continue to take legal actions to preserve their legal rights until we see a judgment that helps shape the legal space.

[4] Kelly-Leigh Cooper, Why Celebrities Are Being Sued Over Images of Themselves, BBC (Feb. 6, 2019), https://www.bbc.com/news/world-us-canada-47128788 (reporting on multiple lawsuits filed by photographers against various celebrities)